Skip to content
WE ARE BACK IN STOCK! LIMITED QUANTITIES SHOP WINTER

3 reviews
Regular price $40
Need a fresh lens, or a new look for your Fathom or Fathom+ goggle? Compatible with ALL Fathom and Fathom+ goggles.
/

Best freaking googles I’ve ever tried . Amazing I can keep one lens on for the whole session. The only time I swap them out is when I night snowboard . Can’t recommend these enough 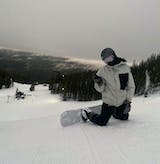 I finally broke down and bought clear lens. Some of the friends have them for the overcast days. With snowmaking on those day's there can be a fog that forms over some areas of the mountain. The other week I lifted my low light Glade lens and just had my glasses on for one of those areas. I could see a little better, so I ordered the clear lens. I'll say they do work well. Though last week we skied in one of those clouds, that seemed pretty thick. When we stopped a little way further down, all three of us said, "I couldn't see anything in there". We all laughed. Were in a late 60's, one of the friends has Smith low light lens, the other has Glades with the photochromic lens.

Love the goggle but it is a bit snug on my head.

Fathom Lens
3 reviews
from $40
Back to Accessories